These seven men went in faith to the State of Alaska with hearts ready to serve 9/5-20/11.  What began as one man’s dream, turned into a Mission Trip for the Kingdom of God! Doors opened for ministry! Lives were changed. Hearts were healed. People were set free! From Anchorage to Wasilla & Palmer, and from Seward to Homer down on the Kenai Peninsula, the truth of God’s Word was ministered.   Food and clothing were distributed to the needy in The Treasure Box area as they served with Blood N Fire Ministry. They listened to many life stories, prayed for salvation and for the many needs of people that they were able to encourage and comfort. The Team offered their hands and hearts to the leadership of many churches, ministries, and people, to give of their time and to serve as the Spirit led. They financially blessed Missionaries who were just starting their own ministry in Alaska. These men on the Team were “changed by the love” that they received from those they served, and from all of the churches and ministries who ministered to the Team's own needs in such unexpected, beautiful and humble ways.  The Leadership of Northgate Alaska Church, Ebenezer Emergency Fund, and the Blood N Fire Food Ministry were living examples of Acts 4:32 "And the multitude of them that believed were of one heart and of one soul: neither said any of them that the things which he possessed were his own; but they had all things common."  All the men's hearts on the Team were knit together on this journey, and they truly became “brothers.” They came home with more confidence, boldness, and a greater sense of God’s purpose for their lives. They came home “on fire” for the Lord, and are still impacting their families, churches, friends, co-workers, and communities, who can’t believe how much they changed on their journey! This is how it was in the early church when God’s Spirit first touched ordinary people, bringing them to faith in Jesus, empowering them to love God more deeply, to demonstrate the Kingdom of God lifestyle, and to love “their neighbor.”  This trip showed the team how powerful love is, especially when shown through hearts that can work together in unity, to transform the world they live in. This is what AWAKENING looks like! Alaska is now in their hearts, and many of them hope to make a return trip there someday! They left their footprints on many hearts, and “good fruit” that satisfied those who were hungry and thirsty. They WILL REAP what they sowed into many lives, and the remembrance of it all has risen up as a memorial before the Throne of God Himself.  The Team was made up of so many more who were interceding in advance of the trip, and who sowed financially to make the trip even possible!  God bless all of you!  Special thanks to Corporate Sponsors:  Outback Steakhouse Partners Mark Hutchins at the Canton Store, Mike Knoeller at the Ocean City Store, and Craig Saathoff at Hunt Valley, for providing dinners for the Team while in Alaska!  And all the local Ocean City area Restaurant Owners who sowed into the trip...Fresco's, Tony's Pizza, Lombardi's, and Franco's Pizzeria! Thank you all for being part of the Alaska Mission Trip!!!! 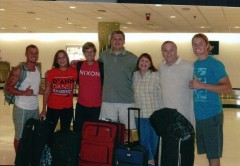 At the Airport in Phoenix

Team Arizona had an awesome Mission Trip to Arizona 8/9-13/12! This group of 8 traveled to the city and suburbs of Phoenix. (Sorry we couldn't get a group photo including Antoine too!!  They went in obedience to the leading of God’s Holy Spirit, for His Kingdom purposes in their own lives, and also in those lives they touched along the way, and while there in that city. The Team went with hearts filled with God’s compassion, to bring His love, peace, and joy as they would serve others in Arizona, while expecting a touch of God for themselves during the conference meetings. Their service began while still in Maryland through fundraising, as they took part in feeding dinners to the homeless and hungry at HALO Ministries locally. Then they served on the “Helps Committee” at two events hosted by Xtreme Prophetic, helping with the set-up and tear-down of sound and media equipment, joined the Intercessory Team to cover Xperience Night in prayer before the event, fellowshipped & ministered to other guests at the events and helped to “equip” some of the Staff members of Xtreme Prophetic, who were desiring to grow in spiritual maturity, character, and integrity. In all our travels to and from Arizona, there were also “divine appointments” to minister to those who
were lost without the salvation that only Jesus could bring, and to those who
needed healing that only He could give, to spend quality time fellowshipping
and praying with a family in Phoenix, and to help provide transportation and a
meal to a new resident in the area who wanted to go to the meetings. (Thank you Antoine!  We couldn't have done it without all your help and hospitality while in Phoenix!)  Even during the meetings of the Conference in Mesa, we were told by two Staff members that our presence there had brought a “shift in the atmosphere” every time we came into the Conference Room, as we shared the light of His love and great joy with others who had come to the events. It was HIS Presence, oozing out of the Team as we worked together in unity that had made the difference! God blessed the Team with wonderful support from members of the local community and social media networks who both prayed us there and back, and provided the financing to make it possible! Thank you so much! A special thank you to Outback Steakhouse Partner Mike Knoeller in Ocean City, MD, for providing meals for us in Phoenix, and to the Riverview Chik-Fil-A in Mesa, AZ, for blessing us with lunch one day!  The Team couldn’t have done it without all of you!!! 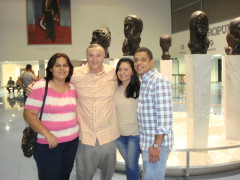 Team Members Jay Sanchez and Bob Nefferdorf made the journey to Nicaragua 8/13-23/13.  This trip was LIFE CHANGING!  The main purposes for the journey were to collect soil samples from the 123 acre Renacer Outreach Farm, and to meet with Tribal Leaders in the Kisalaya and Waspan areas, to discuss Renacer's plans to farm their land, to help the local people to become self-sustainable to be able to buy their families food and clothing.  Bob wanted to look at the water supply as well to see if he could improve that situation.  They arrived safely to Managua and were met by Pastor Tamara from the Church in Chinadega.  They talked that night, and arrangements were made for her to join them at the Outreach Farm a couple days later.  After a charter flight to Waspan, and walking a few miles to the Farm, they got to Kisalaya.  The beauty of the rainforest made it look like ""Eden."  During their time there at the Farm, where the Miskito Indian Children are fed one hot meal a day, and provided clothing and medicines, Jay walked the Farm and got the soil samples needed.  A meeting was arranged with the Tribal Leaders.  The day of the meeting, the leaders came together and met in peace and unity for the first time EVER!  (That's what prayer will do!)  After the meeting, the Leaders experienced the Presence of God when Bob prayed asking God to "heal the land."  This led to daily visits by the Leaders to discuss the meeting, God's Presence, and the things of the Lord.  There were POWERFUL times of healing and deliverance prayer, the release of the prophetic, salvation, and teaching ministry to greatly encourage Church Leaders, Staff on the Farm, the elderly, the children, the mentally tormented, the lost, single women, and the sick...in the jungle, at the Farm, at the Church service at the Farm, in Waspan, in Italy through "Skype" online, and at a House Church meeting in Managua.   They arrived back safe and sound in the states on the 23rd!  We thank God for all who supported this incredible trip of a lifetime!  It was a TEAM effort, with everyone praying in intercession, and helping financially! This is what can be accomplished for the Lord when everyone moves in "unity and love!"  The reports from Nicaragua have been very encouraging, with Jay saying that a "Love Revolution" had begun!  He said that Kisalaya will NEVER BE THE SAME!  A return trip is being planned. 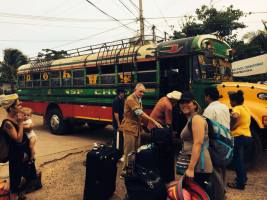 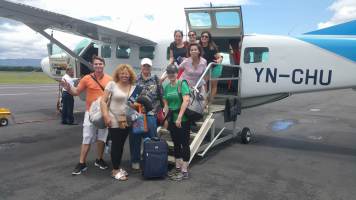 The wind blows where

it wishes, and you hear the sound of it, but cannot tell where it comes from and

where it goes.  So is

everyone who is born